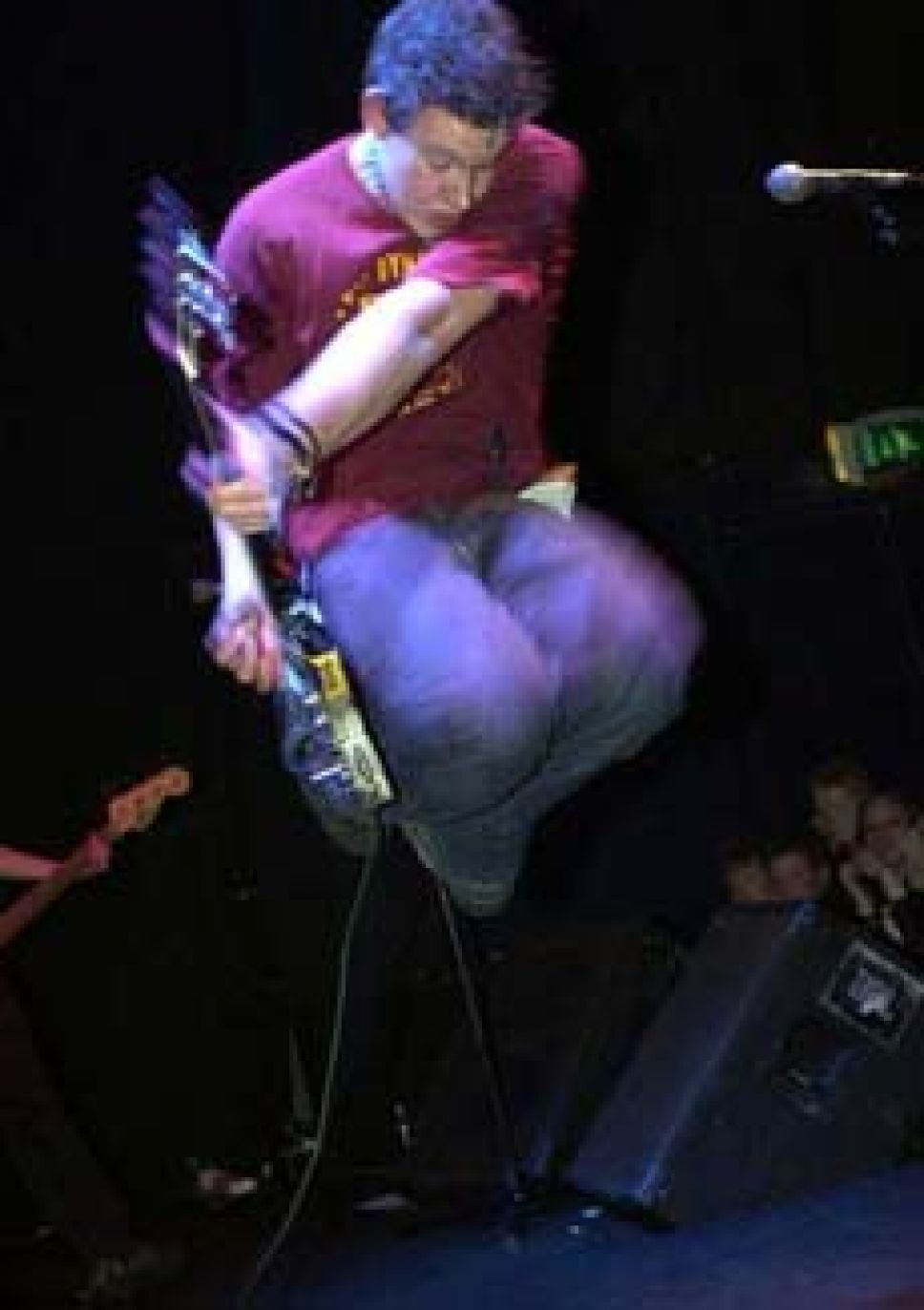 In the tumultuous wake of one of their regular rollicking Blast shows at the Temple Bar Music Centre, young punk foursome Nerdlinger are struggling to make themselves heard in a noisome nearby hostelry. Struggling that is, amid the raucous shrieks of laughter coming from the rather colourful hen party, who are fiercely arm wrestling each other at the next table. What are a bunch of nice Roscommon guys doing in a punk band in a place like this?

“As you can imagine, there’s not much else to do in Roscommon, besides form a band,” singer Cormac Sheehan replies. You can see why the perils of life as a roving rock band would be so attractive. Nerdlinger began life as Anti-Hero in the middle of ’98, born of the friendship and a common love of bands like The Misfits between local lads, Cormac, guitarist Conor and bass and drum-playing brothers Donal and Eoin.

There aren’t many places to play in Roscommon, Nerdlinger tell me. They had their first gig in Batty O’Briens, the neighbourhood alternative hot spot, a pub with a converted shed out the back for gigs and the scene of their recent punk festival, which ended in debacle after a raid by the Gardai.

“The owner is quite a liberal character as regards putting on more unusual interesting bands, rather than the usual covers crap you get in most places. It attracts a more unconventional crowd,” Cormac says.

“The cops just didn’t like the look of the crowd,” is the only explanation anyone can offer for the reasons behind the Festival incident. “The Friday was great, everything went well, then on Saturday we were raided after about four bands. It was the biggest drugs raid in the west for three years!” drummer Eoin exclaims in sheer wonderment. “They caught one guy with a ten-spot and confiscated a girl’s birth control pills and that was it,” they laugh bemusedly.

As well as organising gigs and festivals, Nerdlinger’s lead singer and songwriter also compiles the With Harmful Intent fanzine, as well as putting together the band’s website and is involved with anti-corporate groups like Globalise Resistance.

“There’s a pretty healthy underground scene in Ireland, but you don’t get to hear about it unless you’re in direct contact with people,” he says. “One of the most attractive things about it is that if you want to organise your own festival or put out a record, you can just go and do it. There’s loads of people who are really into the d.i.y thing.”

He is full of praise for Toxic Promotions who for the past year have been putting on punk gigs in the Temple in Dorset Street, and also for groups like thumped.com which provide an outlet for young bands to promote their music.

The band have released their own Roadkill

themselves. They have little interest in signing to a big label.

“Stop saying we’re pants!” Cormac tries to hush him and continues. “We’re happy doing everything ourselves. We’ve never had a manager or anything. There are certain labels we wouldn’t be opposed to signing with, but we certainly wouldn’t be that comfortable with people telling us what to do. There is a stigma on the punk scene about bands making any kind of money at all, but it would be nice to have a bit of money to pay for things like travel and broken strings, just enough to be able to keep making music. But there is a fine line between doing that and making money for somebody else.”

“Shut up!” Cormac hisses. “Conor just likes to be negative. It is a thing though, when you start out playing in your home town, everyone tells you you’re shit.”

“We learned humility at a very early age,” Eoin interjects.

“So it’s very heartening when someone comes up to you and gives you a compliment after a gig. Or if they give you drinks.”

There’s no pretentiousness with Nerdlinger. Would they describe themselves as classic three chord punk band?

“We just can’t play very well,” comes the flip answer, but Cormac continues,“The more we learn our instruments and listen to other kinds of stuff the more technically proficient we get. Three chord punk is kind of a cliché – there are bands like Fugazi, Redneck Manifesto or No Means No who fall under the banner of punk, post punk or hardcore but who are very diverse. But we do believe that musicianship isn’t as important as energy and attitude.”

Energy and attitude is something that Nerdlinger are not lacking, and they easily manage to combine political awareness, independent thinking, loads of personality and absolute fucking hyperactive fun. The kids sure are doing it for themselves.